Aspects Of Love - An Anthology 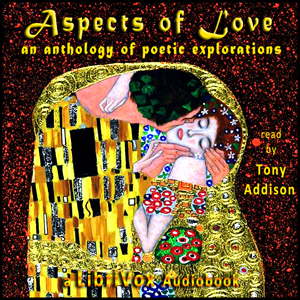 audio
Aspects Of Love - An Anthology

LibriVox recording of Aspects Of Love - An Anthology by William Shakespeare; Walt Whitman; Plato (Πλάτων); John Donne; Sappho. (Translated by H. De Vere Stacpoole; Benjamin Jowett; John Myers O'Hara.)
Read in English by Tony Addison
Aspects Of Love is an anthology of poetic explorations on the theme of erotic love - though one of the "poets" represented here is better known, even than as a dramatist, as the philosopher, Plato. His Symposium heads off this set of erotic explorations. In The Symposium's philosophic play, he depicts a scene of men cosing together over dinner, each describing what he finds in his experience of love. I have followed this pattern in the choice of works for this anthology - in a similar manner, each of these works deals in a radically different way with the discovery of love. Whether philandering or married, heterosexual, lesbian or gay, under cover of friendship or as flagrant delight, from Plato through Donne, Whitman, Shakespeare or Sappho. we will not cease from exploration till we reach at last, as The Symposium does, a vision of the union of love as a discovery of the Divine. Surely there must be something here for everyone. - Summary by Tony Addison
For further information, including links to online text, reader information, RSS feeds, CD cover or other formats (if available), please go to the Librivox Catalog Page for this recording.